A downloadable game for Windows and macOS

Welcome to Stick the Chick !

Stick the Chick is an action platformer from 2 to 4 players. Armed with a glue gun, players will face each other cleverly by sticking their opponents to the moving platforms of the map to take them into the "crusher" that will kill them. To win,  be the last survivor! As a chicken you can use your wings at their best to float for a little bit of time each time you are in the air. You can put some glue on the platforms to stick another chicken who walks into it.

Your misson: Be the last chicken man in the fight!

Doomsday of chicken: The end of the world is near and as a chicken, you are too dumb to do something useful. A crusher appeared on the map and most of the platforms are sucked in it. Every chicken who goes in it will die.

Survive: use your weapon to throw glue at your oppenent  or a platform. If a player and something else is stuck with glue the physics is changed.  Use your brain, skills and agility to survive the longest.

Fly or at least try to: your chicken have two different jumps and can float for a little bit of time.

Unglued: If you are stuck you can smash your jump button to fly away. When flying out, you get a little speed boost and become invicible to glue for half a second.

Weapon : you can use your other stick to aim.

Sticky for ever : Glue can stack infinitly and doesn't disapear.

Endless world : your mission will not end until you manage to defeat all your ennemies. The glue stuck on platforms will stay so if you come back you will be trapped even if you are the one who put it here. Be careful!

-Discover the wild life of a Chicken.

-Find out if you are  the best shooter or  the best runner.

-Get a lot of fun with 3 other players or improve your skill in a 1v1.

-Enjoy one original soundtrack made in two hours.

-Be prepared for some handmade hot chicken.

-You're going to be amazed with our astonishing pixel art that gives the game the old school look but in a fresh twist.

-You have the ability to play with any controller that has at least  two sticks and  5 buttons.

We are a group of  nine students in the school L'Institut de l'Internet et du Multimédia. We've made this project during the GodfatherWeek 2019, a game jam organised by our school regrouping every video game students inside the school. The Theme was centered around the word "Legacy", in order to answer that theme, every team had to share an object that was supposed to be visible in game with another group in order to form a continuity between every team in the game jam.  We gave the object "the glue gun" and we received the "chicken" word. 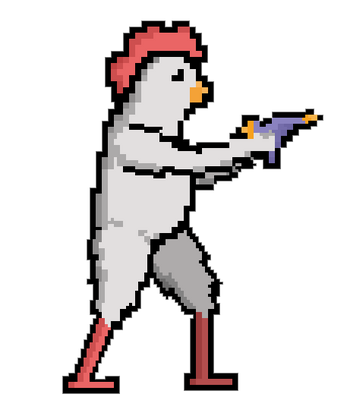